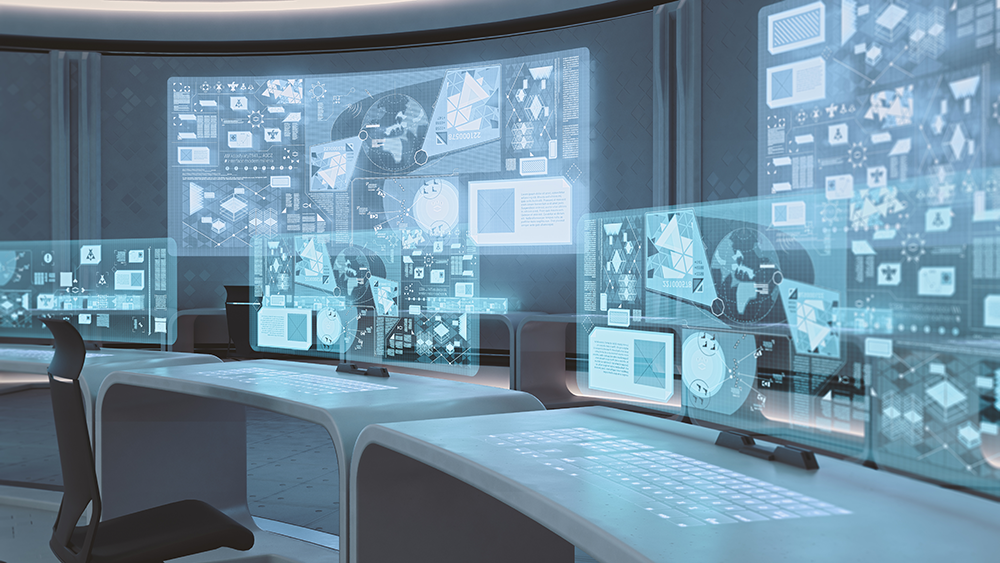 With the focus on cloud computing, cybersecurity, and work-from-home, it’s easy to ignore the one piece of computer hardware we absolutely can not live without — the computer monitor. You may be interested to know that the monitor of the future is just around the corner.

The Monitor is No Longer “Furniture”

It wasn’t long ago that the computer monitor on your desk was nearly as big as a piece of furniture — essentially a bulky, very heavy, color television set.  With a screen that measured 17-inches diagonally, the computer monitor tended to occupy one-third of the space on most office desks, and it had a measurable impact on electrical usage and HVAC costs in the workplace.

Eventually flat panel monitors replaced these heat generating monsters, but aside from improvements in screen resolution and graphics capabilities, not much has changed in recent years.

At Least the Footprint is Smaller

Now the day has come when monitors are being discussed and getting much-deserved attention. The truth is that the modern monitors that are soon to be placed in offices and homes around the globe are filled with new features. You can expect to soon work with a monitor that acts as a central hub for an office, your home, or your home office.

Most people don’t think much about their monitors provided they’re working properly — if your employees can see their documents, applications, and graphics on the screen, they use the monitor and then move on, without giving it much thought. But as technology advances, the computer monitor we know today may finally become an item that increases productivity.

Get Ready for a New Interface

New aspect ratios will let users look at documents in new ways, while higher resolutions will provide versatility for those who need it most. Equipped with their own 5G cellular abilities, these devices will be wireless as well. Since they won’t need to be tethered to a single spot, they can take advantage of a more compact and thinner design.

The Future of Monitors

The future of monitors may change the way people work and live their lives on a daily basis. Expect to see thinner monitors with exciting software and hardware that connects to the Internet and lets you get the job done in the best way for you. It could be a change that revolutionizes the office — again!

You may also enjoy:

Can Technology Future-Proof Your Law Firm?

Peter Fidler has more than 30 years of IT experience. His expertise ranges from email systems to database applications to network infrastructure. With Warren Eng, he founded WCA Technologies to provide high-quality IT service to not-for-profit organizations, law firms, and a variety of small- and medium-sized businesses. His knowledge of IT infrastructure helps ensure that every problem large or small is addressed appropriately and effectively. Peter graduated from Bentley University with a Bachelor of Science in Business and then went on to receive his MBA from Fordham University. Call Peter 212-642-0980 | Email Peter pfidler@wcatech.com.

The Future of Telehealth and the Technology that Drives It
Can Technology Help Save the Planet?
Do Immersive Gaming Technologies Have Implications for Business?
The Realization of Ambient Computing in Our Lives
What Challenges Do Data Collection Regulations Present?
Common Types of Spyware
Advantages of Cloud-Based Services for SMBs
Technology and Personalization
Should My Small Business Embrace Virtual Events?
Remote Teamwork Advantages